The third generation MotoBrake is all FPGA-based  and it is a smaller, brighter and sleeker.

Deceleration bike lights (US Patent US 10,363,865 B2) were one of my first moto-related designs. The first generation MotoBrake, in 2014, after two years of experiments and tuning, was the direct result of a comment my bike instructor made just before taking my exam, to make sure I tap my brake lights when I go off ramp, or I would fail the test.

Since, a lot of other manufacturers have added similar devices in the field. Mine were quite complex to operate and configure initially but worked well and since, I’ve tuned it more and with the help of newer sensors and Bluetooth technology, I tried to make them better, smaller, brighter and easier to use.

This isn’t a new idea but I really wanted to make it better. My bike is an old machine that needed some upgrades in terms of conspicuity so the natural thing to do was to add some Day-Running-Lights(DRL).

My design has progressive turn signals and slow-fading-in DRL, tail/brake cancellation for the duration of signalling (background cancellation feature), brightness control, brake modulation and are simple to install by adding one extra switched-12V wire to the turn signal enclosure as well as a brake signal (rear lights). And if the front double as DRL, then the rear set can double as brake light/tail light.

In addition, each set can be configured in multiple ways via local dip-switches to meet local regulations.

The front or rear sets will work with BMW bikes (and some Aprilia, Triumph and KTM models) ranging from 2000 to present.

This is a wiring example.

Most of my basement-designs are based on Field Programmable Gate Arrays (FPGAs) devices and some require small physical devices with large logic slices and the Lattice LCMX02-4000HC-6QN84C was a prime candidate. Lattice does not offer an evaluation board for this exceptionally versatile device so… I designed one. MotoBrakeMicro was actually designed on this board, which also features a Microchip RN4871 Bluetooth module. The design schematics and the basic Verilog code that interfaces with an iOS app are free.

Motorcycle enthusiasts and developers have been trying to hack into their bikes every since CANBUS has been introduced by BMW or other European manufacturers. In the beginning, only the motorcycle sensors were on the bus but slowly, more and more messages have been added. When I decided that pinching my OEM cables to collect signalling from my bike for my added lighting was no longer fun, the idea of hacking my bike CANBUS was born. Sniffing the bike CANBUS codes, revealed that most functions I was looking for had corresponding CANBUS messages. Newer bikes will be slowly abandoning CANBUS in favor of the single-wire, cheaper LinBUS so the need to create decoders for both standards is even greater.

A great deal of recognition goes to ADVRider member “regnock” who’s done a ton of work in this field already. 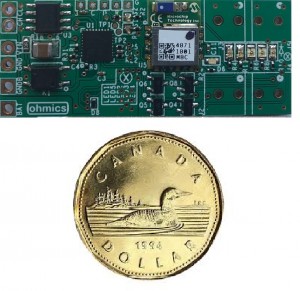 With limited amount of power available thru a bike accessory plug, motorcycle enthusiasts have always resorted to adding accessories via other means ranging from simple relays to relay-arrays or complex power management units.

My solution is a single-port module, using a smart SSR chip (Solid State Relay) chip that incorporates all the necessary protections in a super small package.

Connection is simple: Black and Red wire connect to your battery directly. The White wire is the trigger and can be connected to any ignition-activated 12V wire (such as your 12V accessory plug). The Black and Green wires are your output to accessories offering you up to 20 amps per unit, for most demanding accessories.

CONDITIONS By ordering the displayed products you are agreeing to the Terms and Conditions.
Please email prior to ordering for questions or to confirm item availability.
Shipping using Canada ExpressPost 6-12 business days with $100 basic insurance.
Only shipping at the PayPal confirmed address. NO EXCEPTIONS.
Only shipping to North America. Those overseas interested please email first.